Skip to content
Previous Next
Can you really die of a broken heart?

Can you really die of a broken heart?
By Marie Ellis
Sat 1 Mar 2014 – 12am PST
Losing a loved one can be heartbreaking. But a new study shows that this can be more than just symbolic, as the chances of experiencing a stroke or heart attack after a partner’s death doubles within the first 30 days.
The researchers, from St. George’s University of London in the UK, have published the results of their study in JAMA.
They note that, sometimes, grief can lead to extra physical stress and can also make people lose interest or forget to take their medication.
To investigate bereavement as a risk factor for cardiovascular problems, the team assessed the rate of stroke or heart attack in patients over the age of 60 whose partner died. They then compared that with individuals whose partners were still alive.
In total, there were 3,0447 individuals in the study whose partner died and 83,588 controls whose partners did not.
The researchers found that 16 per 10,000 people whose partners died experienced heart attacks or strokes within 30 days of their partner dying, compared with only 8 per 10,000 from the control population.
After 30 days, however, this increased risk began to fall in individuals who lost a loved one.
Individuals whose partner dies have increased risks of heart attack or stroke during the first 30 days, researchers found. 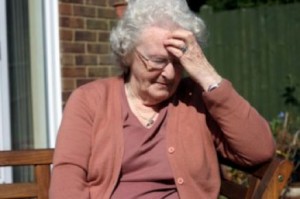 Dr. Sunil Shah, co-author and senior lecturer at St. George’s University of London, says:
“We often use the term a ‘broken heart’ to signify the pain of losing a loved one and our study shows that bereavement can have a direct effect on the health of the heart.”
Grief increases cardiovascular risks
There has been evidence from other previous studies that partner loss and grief can lead to changes in blood clotting, blood pressure and heart rate control, Dr. Shah says.
“In addition, we have found, in another study, that in the first few months after bereavement, individuals may not consistently take their regular preventive medication, such as cholesterol-lowering drugs or ,” he adds.
All of these factors can contribute to increased risks of cardiovascular events, and Dr. Shah says it is important for doctors, friends and family to be aware of these increased risks.
Dr. Iain Carey, senior research fellow at the university, says:

“We have seen a marked increase in heart attack or stroke risk in the month after a person’s partner dies, which seems likely to be the result of adverse physiological responses associated with acute grief.

A better understanding of psychological and social factors associated with acute cardiovascular events may provide opportunities for prevention and improved clinical care.”
Medical News Today recently reported on a study that suggested loneliness increases risk of premature death in seniors. The research revealed that extreme loneliness is almost on par with disadvantaged socioeconomic status in terms of being a risk factor for early death.
We also reported on a study suggesting that the death of a loved one in childhood affects adult mental health.